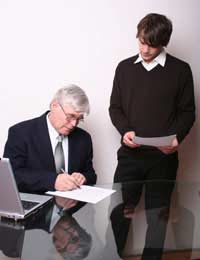 Partnerships in business are totally different from those of a relationship partnership and as such have different way of ending.

Winding up an insolvent partnership can be difficult as both partners are liable for the debts, no matter who incurred them. As the company will be in both the partners names, both parties can be made to pay back the debts and subsequently, Declared Bankrupt. This however, is assuming that the partnership is part of a registered company (A company which is registered with the Registrar of Companies, at Companies House, under the 1985 Companies Act). As an unregistered company, action will not be taken against individual partners unless the Creditors request it (under Article 7 of the Insolvent Partnerships Order 1994).

Winding Up a Partnership

As the members of a partnership are personably liable for the debts their company incurs, the creditor can file for Bankruptcy Petitions against both or either partner without actually filing to have the partnership wound up. However, if both partners are declared bankrupt part of the restrictions order states that you cannot run your own business. If only one partner is declared bankrupt then it is possible for the company to survive by bringing in another partner to replace the bankrupt member.

Winding Up Your Own Partnership

If bankruptcy is declared with a partnership it will be treated the same way as if the company were a registered, limited company. The main difference between a partnership and a limited company is that the debts of a partnership are completely the responsibility of the partners, whereas in a limited company, there is a limit as to how much of the debt is the responsibility of the directors. If you are starting a business that is likely to need a vast amount of credit or incur a lot of debt then going limited as soon as possible is advisable as you wont be responsible for all the debt personally. Instead the business is responsible for paying back the debt via the assets.

If you plan on winding up a partnership due to being insolvent you need to get legal advice as the law is complex in this area. You can go to the local Citizen’s Advice Bureau who will point you in the right direction. It can’t be stressed enough how important it is to have legal advice when facing dire financial circumstances, whether as an individual or as part of a company.