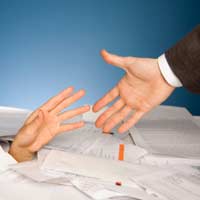 An insolvency practitioner primarily deals with the following scenarios:

When to use an Insolvency Practitioner

Under normal circumstances an insolvency practitioner deals with people in IVA (Individual voluntary agreement) by advising people who have serious money problems on the best course of action. They will deal with the creditors directly, thus removing the pressure of threatening phone calls and financial uncertainty. Their aim is to help their clients to become debt free, pay off creditors and if possible, avoid Bankruptcy.

Apart from dealing with individual cases an insolvency practitioner can be appointed by the court to carry out the winding up of a company and are regulated by the Insolvency service. You will be interviewed and they will take over control of your company.

If the official receiver discovers that a large amount of money is owed they will then call in the insolvency practitioner, appoint them as liquidator or trustee and wind up the company as required.

Insolvency practitioners are paid out of money recovered during the winding up of the company and as such are able to decline the appointment if they feel there is not enough money in the assets to pay them. Under these circumstances the official receiver must continue to handle the case.

It is worth noting that Insolvency Practitioners charge high fees, some up to £600 a hour for company insolvency and there is a call for the government to regulate the service further. Some liquidations by the Insolvency service have taken years to finalise, with the fees running into hundreds of thousands, as with the Robert Maxwell case where the insolvency practitioner is reputed to have claimed over £92million in fees.