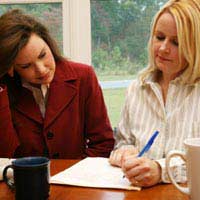 If someone dies insolvent, there will be implications on their estate - under law you can even be bankrupt after death. If a relative dies leaving a will distributing their belongings to the family but is also facing insolvency, the law states that the will is over-ruled. In this case the creditors will receive any income from the sale of the property, both home and personal, under the rules of bankruptcy.

This can be distressing for the family left behind, but rest assured that the cost of burial and funeral will be paid before the creditors receive any money.

The division of assets and payment of creditors will be carried out under the Administration of Insolvent Estates of Deceased Persons Order 1986 and Section 421 Insolvency Act 1986.

In some circumstances the death occurs after the person was made bankrupt and in these cases the trustee, or official receiver, will continue to deal with the bankruptcy order as they did while the person was alive. However, they will need to make provisions to pay the funeral costs from assets they have at their disposal.

The bad news is that if the deceased person owned property it will no longer pass to the surviving spouse. The law, as a result of changes to the Insolvency Act of 2000 now allows for the property to be included in the assets of the person that has died to be disposed of to pay their debts. If they were joint owners of a property the official receiver can then apply to the courts to reclaim the portion of the home from the surviving spouse and again force the sale of the home. This order can be obtained any time up to five years after the date of death of the bankrupt.

It is possible that the debts of the person that died be dealt with on an informal basis. This is known as Informal Administration. The members of the family take charge, sell assets and pay off the creditors on behalf of the deceased. This is all done without the need for a insolvency administration order and must be carried out by an appointed representative of the dead person.

If you have lost a spouse or close relative and discover that they are deep in debt, don’t panic. You are not responsible for their debts. If however, the person knew they were dying and gave you all their money before death occurred you may be required to hand it back in order to pay off their creditors. If you have signed any guarantees to pay for their care during their death or credit preceding death then you will be held responsible and have to pay the debt. As a rule, though, you will not have to pay the debts of the deceased person.

If you suspect that the deceased person had debts when you are sorting out their estate it is imperative that you get legal advice before any of the belongings are distributed to relatives.