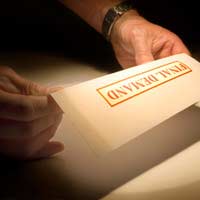 The good news is that most creditors will not issue a statutory demand for the money you owe them. Unless you owe literally thousands and they know you have the money to pay them, they are risking losing their own business via what is known as the domino effect. This means that their costs, loss of customers as word gets around etc could spell the end of their own company. However, don't be complacent; some creditors will chase their debts through the court.

The statutory demand is usually followed by the bankruptcy petition within a twenty one day period of the issue of the demand. It is a sort of precursor to the bankruptcy hearing. However, some creditors will use the statutory demand to convince you to pay up without them ever presenting a bankruptcy petition to the courts. This is because most people will react to the demand to avoid bankruptcy. You can take your chances and hope that they don't go that far or you can pay up. Creditors will use all sorts of high pressure tactics to make you pay your debts. It is essential that you get some debt advice before it reaches this stage.

The demand is signed by the creditor to whom you owe the money, or someone acting on their behalf. It will contain all the details of your debt, such as the amount owed, the reason why and the date that it is payable by. This date can be either immediate or at a future date. It will also give an indication as to whether the creditor feels that you are able to pay the debt. You will find that the sum may be higher than you expected this is because the creditor is allowed to add interest to the amount owed to the date the demand was issued. The interest will cease to be added after this date.

If the debt is a secured one then the property or items that you used as security will be detailed in the demand. If this was your house the sale may be forced to pay back the creditor in full. This is especially true should you be declared bankrupt when your home, car and personal belongings are sold to raise capital.

Once the demand has been issued it is the responsibility of the creditor to ensure that the debtor is made aware of its existence, even if this means that they must personally serve the demand on the debtor. However, the most common means of delivery is by first class post, possibly recorded or signed for. The creditor must prove that the debtor received a copy of the original demand.

Once the demand has been issued you must comply with its contents. If you avoid the serving of the demand or have left the area to avoid paying then the demand will be advertised in the national and local press. You will legally be obligated to comply from the date of publication. From the date that the demand arrives via the post then you have a period of seven days to comply.

Once you have received the demand you can object to it in writing with a signed affidavit outlining why you don't agree with the debt. The courts can dismiss the demand if all the criteria for the issue weren't met or if they feel there is enough evidence to doubt the debt. If you can't prove you don't owe the debt or if you can't pay it back the courts will then move on to the bankruptcy petition.

Effects of a Bankruptcy Discharge